I’ve had the unusual pleasure of living in Riyadh, Saudi Arabia for nine years of my life. Of course, the way us Westerners view the country is a lot different to the way Arabs do. We live in compounds surrounded by high walls and electrified wires with watch towers, they tend not to. Instead they live in houses with… high walls. According to my old Arabic teacher; the higher the walls are, the more important the person living there is.

King Salman hasn’t been seen in public for ages now due to poor health. His reign hasn’t lasted very long. After the death of Abdulaziz in 2015, Salman took over. Now, King Salman has fallen ill and it is thought that he could pass any day now, so the reign has been passed onto another Salman; Crown Prince Salman – who now rules the KSA.

What do the other Arab royals think of it? I’d imagine he’s quite polarising for them. He’s kicked most of them out of their palaces and taken away their money, theoretically to invest in more important things.

The new crown prince has seen Saudi Arabia boast changes mostly aimed at modernisation. Stepping foot into the country for the first time after nine years of living away, I couldn’t believe it. The airport now has shops in it, civilians and women working at the immigration, new glass gateways, and restaurants – all previously unimaginable for the country.

Incredible, I thought. Later during my stay, I found out that popular Western music artists would be performing in the country; the Black Eyed Peas, Enrique Iglesias, Jason Derulo, and David Guetta. I never thought in a million years that I would be able to see any of these famous people perform in Saudi Arabia of all places. I managed to see the Black Eyed Peas and Amir Diab, a famous Egyptian singer.

In addition, I thought something was off when I was at the shopping centres in the city. It took me a while to realise, but I saw women working in the shops. “Hang on,” I thought – “since when could women work here?” Turns out that they’ve been able to work here for three years now. However, some archaic and skewed religious laws remain. At the concert, I noticed a security guard leaning into the crowd from the fence and shouting in Arabic at some men. I had no clue what was being said, but it was clear that he wanted them to leave the crowd. After thirty seconds of that, he noticed me and started pushing me and shouting in Arabic. I wouldn’t budge, so he gave up after a moment. Some nearby onlookers introduced themselves to me and then told me that he was trying to separate the men from the women. Crazily enough, I managed to capture some of it on my phone below. It appears that the culture has yet to catch up.

On the topic of Formula E, it was a showcase event for the country to show the rest of the world that it can be like them. It’s the first of its kind in the country, aimed at the international community as if to say “come in, we’re open.” Below are a few pictures I took at the event. 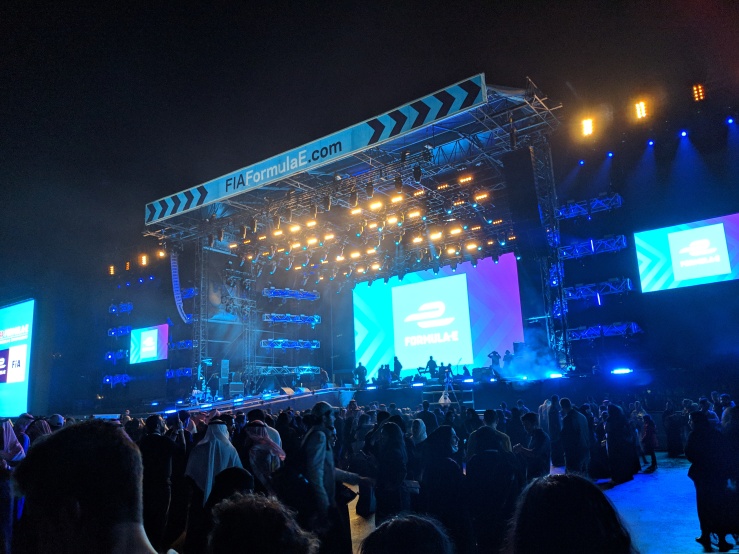 The city of Riyadh is expanding rapidly. Only ten years ago, it was a tiny city with only two skyscrapers; Al Faisaliyah Tower and Kingdom Tower. Below are some photos from the top of Kingdom Tower (AKA Kingdom Centre).

Only about 20 years ago, most of the buildings in the photos above didn’t exist. It was all desert with only steamrollers paving the roads now filled with traffic. The country is rapidly catching up with the rest of the world, but it still isn’t a nice place for women to live. Need to get an Uber? You may need to get in a separate one from a woman. The Mutaw’ah or religious police barely seem to exist anymore – if they still do in the capital. They would be men with robes sporting golden lining, armed with swords. They would usually catch out any women who aren’t wearing an abaya or a headscarf.