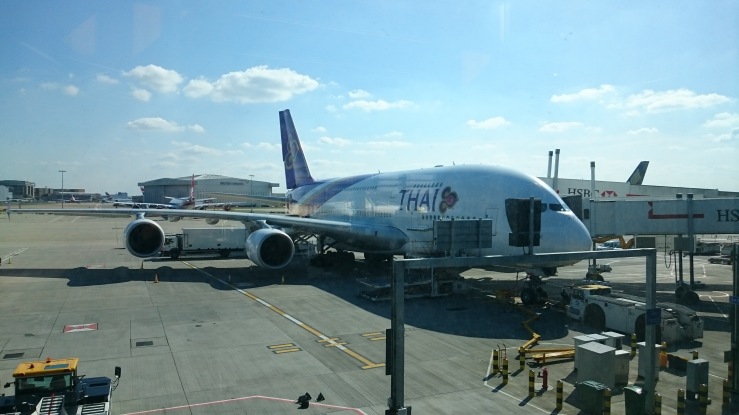 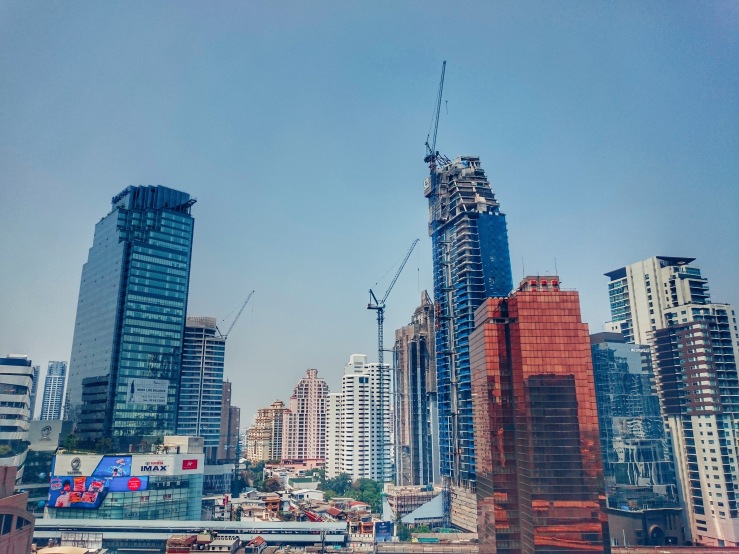 Typically, one would travel to Bangkok for the city life, night life, and all that buzz. Funnily enough, one would travel to Pattaya for the same thing, except there is also a beach there. A thing that has almost always been true about Thailand is that its economy is highly dependent on tourism – a lot of things are targeted at foreigners with lots of disposable income. Over the years, I have noticed the hugely increased likelihood of seeing other foreigners in Thailand whereas there used to only be a few. 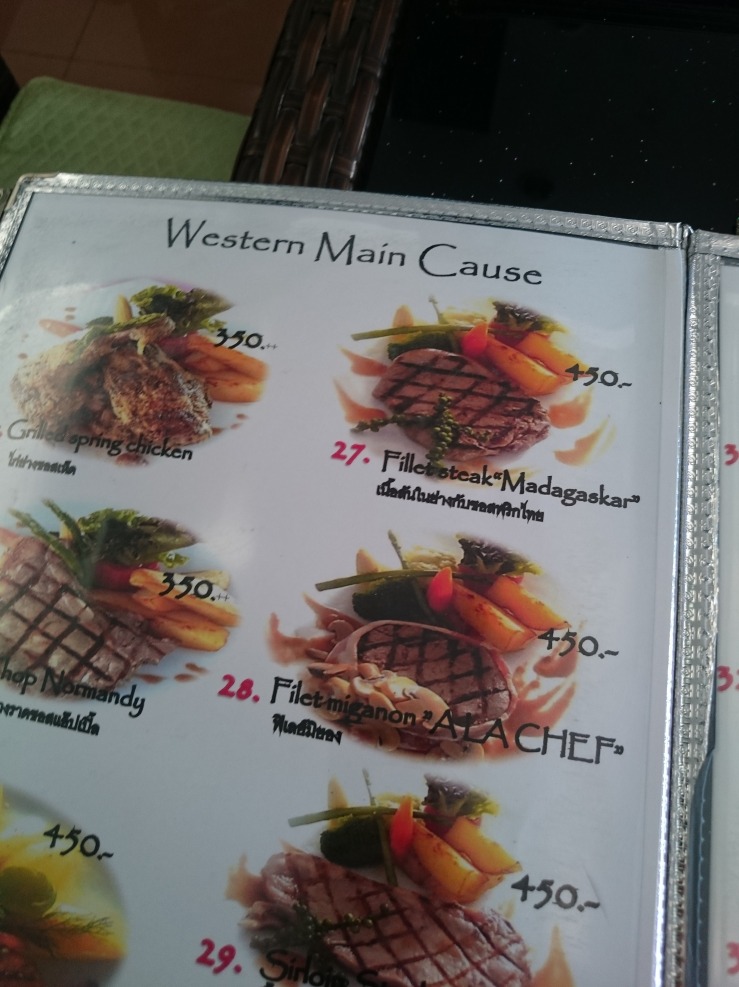 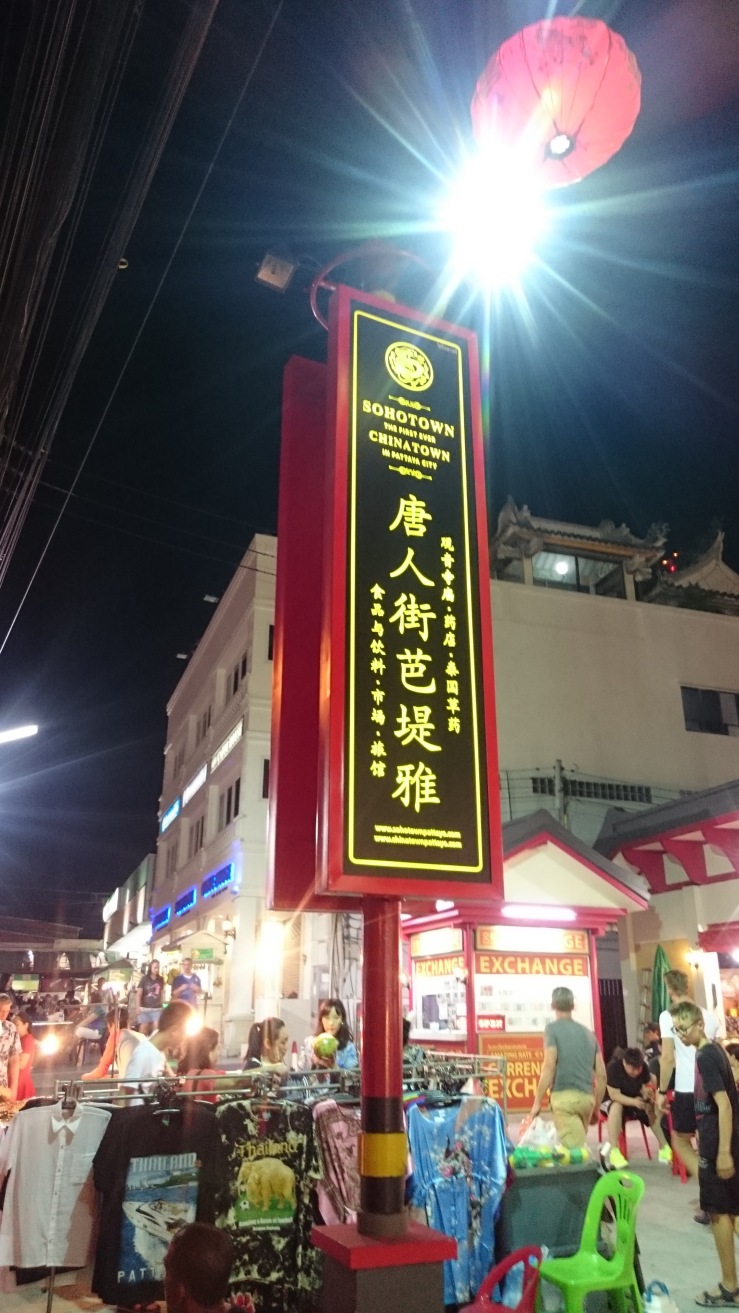 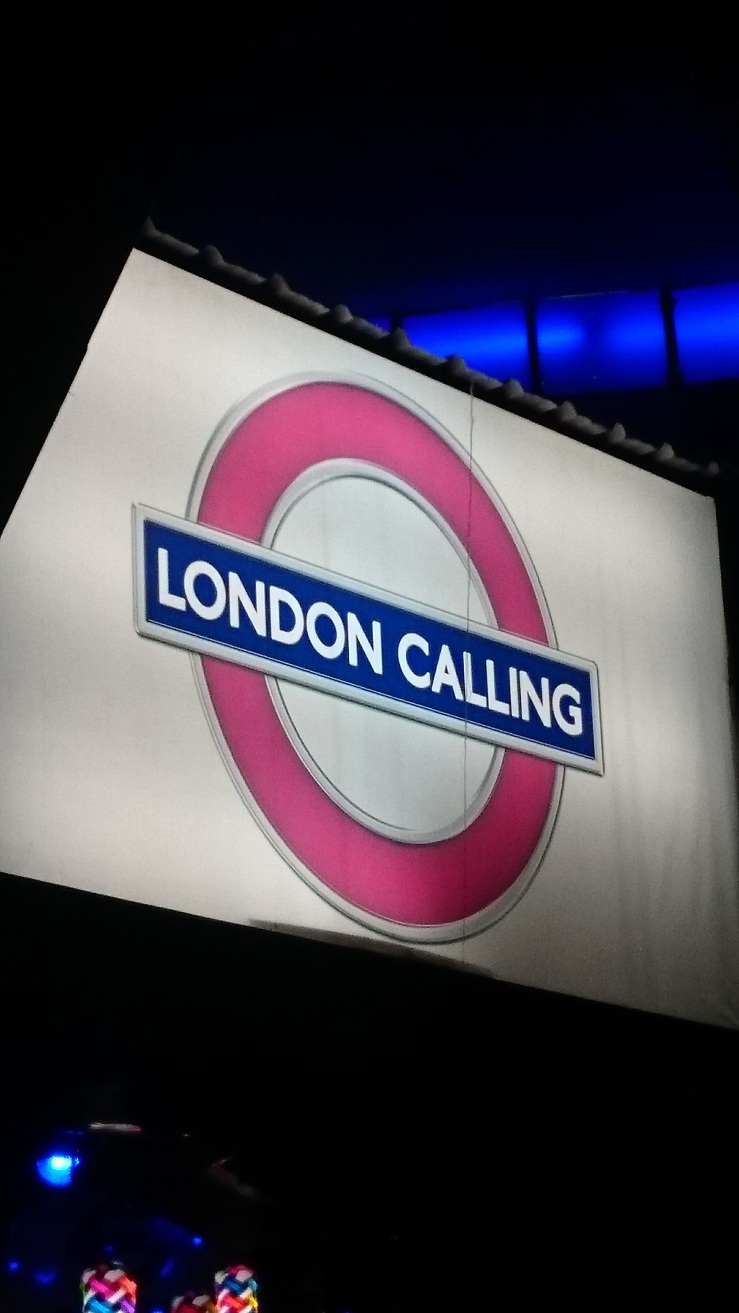 The three displays above are examples of marketing towards the tourist market. The first image is of a food menu I saw in Bangkok; obviously imitating what Westerners would usually go for in a meal, but it also appeals to the local population due to curiosity in what Americans and such usually eat. One easy thing to make fun of is the misspelling of ‘Western Main Cause,’ but I find it interesting just to look at because it reminds you that the person who made the menu probably does not have the same luxuries in technology that we do over here. It is also the determination in the attempt at English shows how important it is that some Thai businesses are able to attract tourists and on some occasions; expatriates.

Soho Town in Pattaya boasts being the first Chinatown there. The interesting thing about this is that it is a recent addition to the city; having only existed there a few years now. There is a massive Chinese presence in Pattaya, especially during the summer where bulk tour groups consisting of hundreds of Chinese tourists visit for cheap. I would think that the existence of a Chinatown is related to this trend, as it must be a popular place for meeting up and doing things.

The lit up London Calling billboard was found in a hot spot called Nana Plaza in Bangkok. Funnily enough, there were actually British people around here. Again, the symbolic link in Western iconography shows the importance of being able to attract tourists for business. 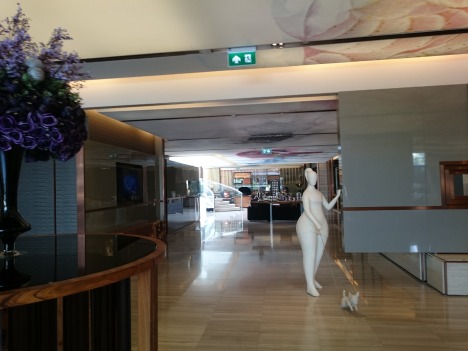 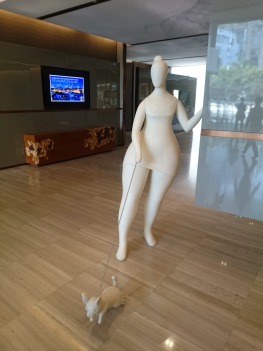 The above photo was something I found humorous. A statue I saw in a hotel lobby in Bangkok and I just had to snap a picture. More than meets the eye – what is the connotation in the statue of a plump woman walking her dog? It’s an impression of the average Western female, of course! The small details matter when you look into them. 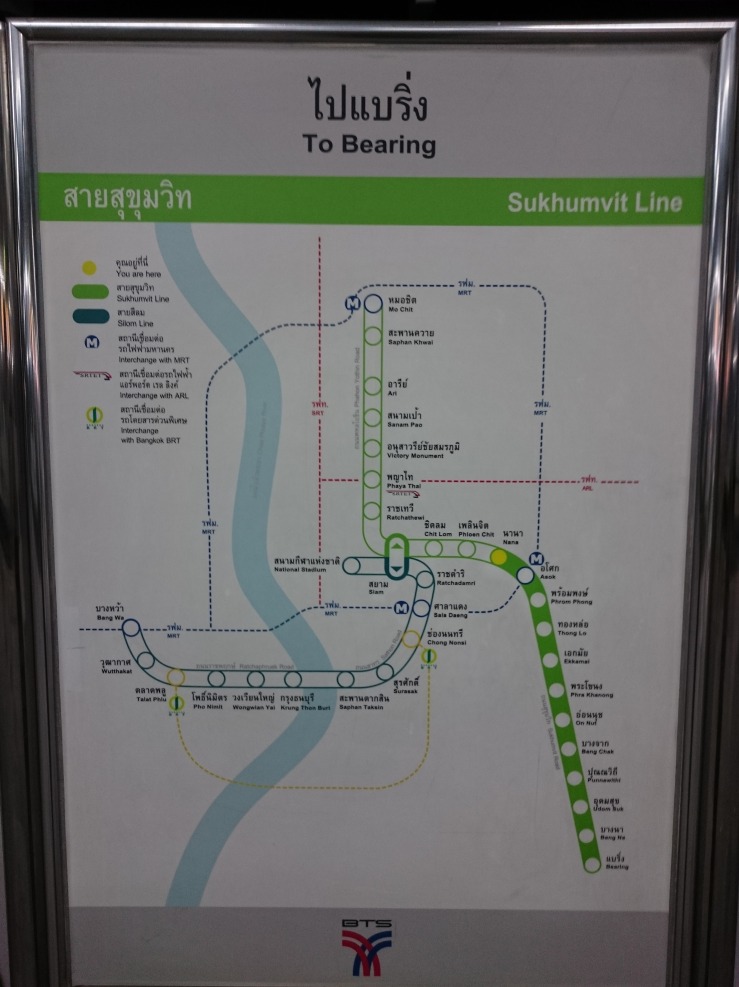 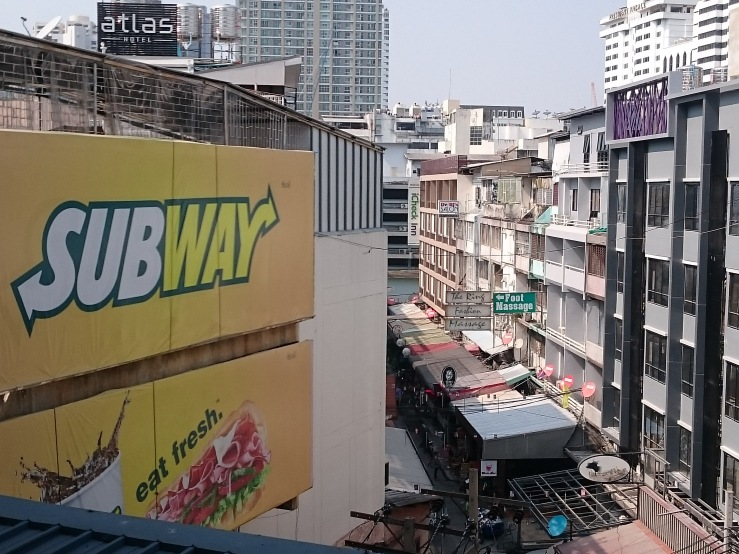 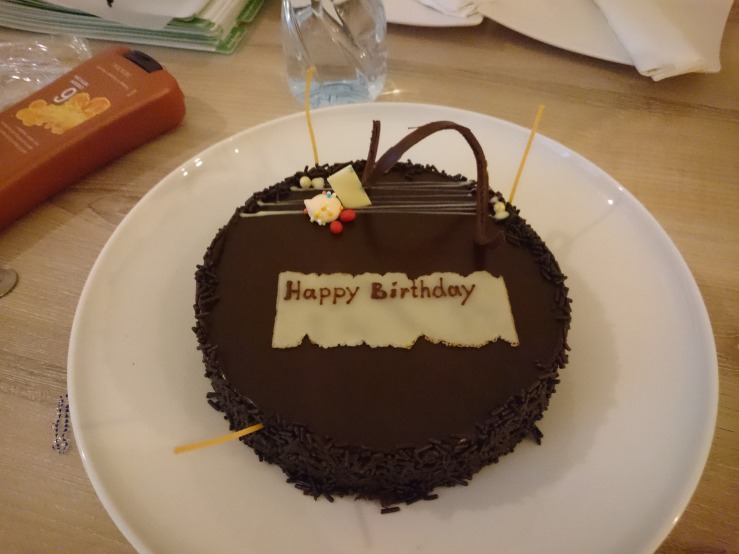 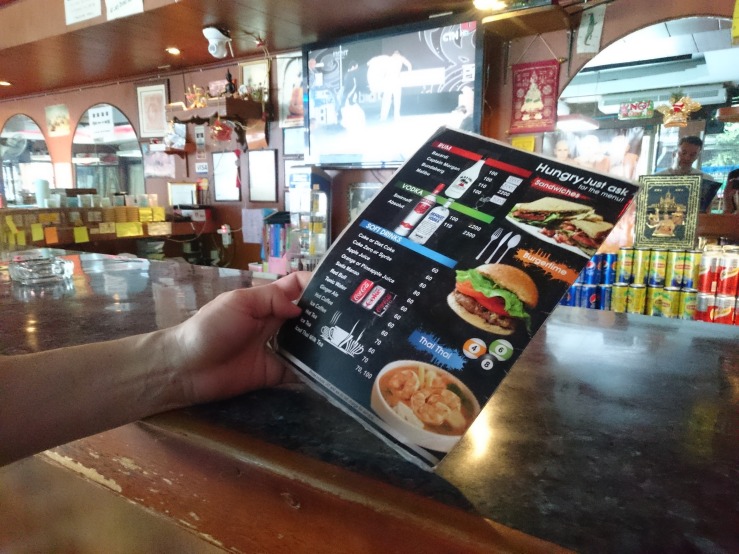 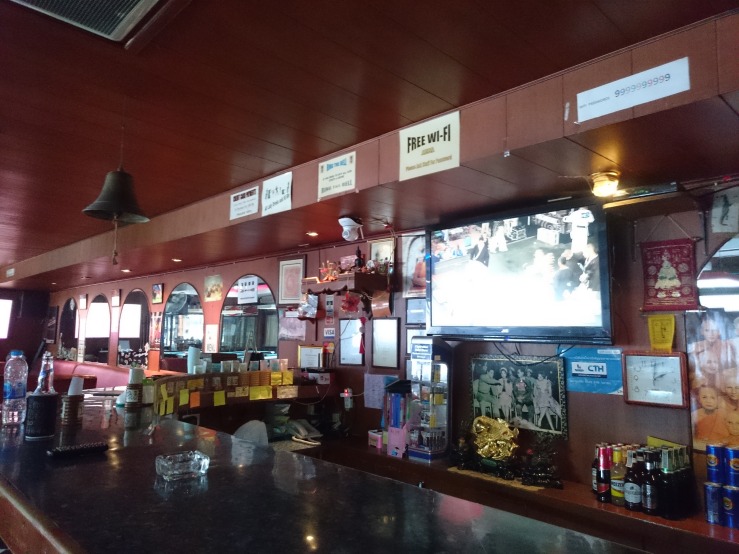 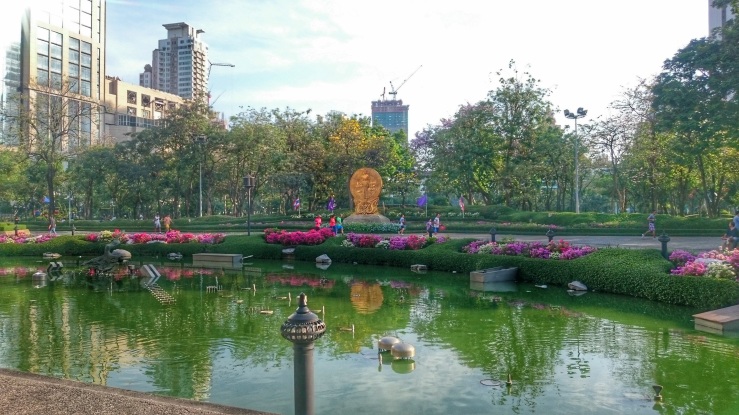